Want to Teach Your Child A New Language? Think About A Programming Language!

Published on February 12, 2019 | Posted in Computer Programming for Kids 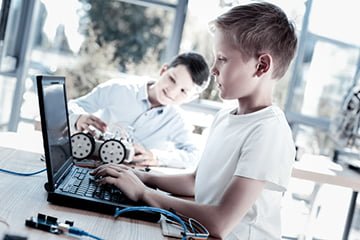 Ask virtually any educator, and they will tell you that the best time for a person to learn a second (or third) language is when they are a child.  Children's brains are "wired" for language acquisition, an ability that -for most- will slowly fade as they age.  So, naturally, many parents look into language classes for their children and wonder which language would be most useful to learn.

If you send your child to learn computer programming for kids, they'll be getting a big leg up on their peers, as well as learning a skill which can turn into highly-lucrative careers once they're out of school.

Why Computer Programming for Kids Is the Best Second Language

While a programming language isn't exactly the same as French or German, the same learning principles apply.  A child will be able to pick up computer programming much more easily than an adult.  Even kids as young as 6-7 can get started.

The big problem with trying to decide whether a child should learn French, German, Spanish, Japanese, or anything else, is that it's a very specialized skill.  Knowing Mandarin is useless if there aren't any Chinese people around!  On the other hand, a common programming language like C++ or Python will work on any computer, anywhere in the world.

It's well-known that someone who learns two or more languages as a child will have an easier time picking up additional languages as an adult.  However, this effect is even more pronounced in programming!  Many fundamental programming skills are applicable to any programming language out there.  A skilled programmer often knows a half-dozen coding languages and can easily learn more as need arises.

It's difficult to think of any professional discipline that doesn't make extensive use of computers and custom code.  Far more businesses will need a programmer than a translator.  This also means that programming knowledge can help your child get jobs in the future, no matter what career they're interested in!  "Knows programming" looks great on resumes in any field.